Monsoons and the Sun

Monsoons and the Sun

Late rains saved most of the 2009 harvest of India, despite a shortfall of 21% in the summer’s rainfall that led to a ban on rice exports, after a 17% loss of production in West Bengal. But 2009 saw the worst deficit in India’s summer monsoon since 1972, while Burma (Myanmar) had its the shortest monsoon season since 1979.

It is chastening to recall that, in April 2009, Reuters reported the Indian Meteorological Department as saying, “IMD’s long range forecast for the 2009 south-west monsoon season (June to September) is that the rainfall for the country as a whole is likely to be near normal.” Even an updated forecast in June expected only a small rainfall deficit. Clearly, the unpredictable monsoons remain a problem for meteorology and climate physics.

Is there a link between reduced monsoon rains and the Sun’s recent sluggish behaviour, shown by the scarcity of sunspots? Probably. But to clarify the solar link well enough to make better regional forecasts, for even a few months ahead, remains an urgent task. END_OF_DOCUMENT_TOKEN_TO_BE_REPLACED

This section of Calder’s Updates is unavoidably a battleground, but within reason it will stick to the physics and dodge the propaganda that surrounds climate research.

Headings in this section

In 1997 The Manic Sun by Nigel Calder was the first book to describe a new wonder of Nature – namely Henrik Svensmark’s discovery that the effect of cosmic rays on clouds amplifies the influence of the Sun on the Earth’s climate. Ten years of progress with the physics led to a second book The Chilling Stars in 2007, co-authored with Svensmark.I was also a script consultant to Mortensen Film for the TV programme about Svensmark’s work, “The Cloud Mystery”.

Despite plenty of time to re-consider the story, if it had turned out to be foolish, the evidence looks better and better as the years pass. Yet most climate scientists still ignore or reject Svensmark’s findings from observations of the real world, physics experiments, and theoretical analyses. Scoffing or vehement objections come from supporters of the man-made global warming hypothesis, who realise that the Svensmark hypothesis offers the strongest challenge to the assumptions in their climate models that predict climatic catastrophe.

The customary give-and-take arguments among experts, about which scientific theory fits the facts better, would be fair enough. But since climate physics became a political issue, the involvement of governments, funding agencies, scientific journals and the media in propagating a particular view of climate change has made rational debate difficult. Here’s a comment from Svensmark in an interview by Discover magazine, July 2007.

Question: In 1996, when you reported that changes in the Sun’s activity could explain most or all of the recent rise in Earth’s temperature, the chairman of the United Nations Intergovernmental Panel [on Climate Change] called your announcement “extremely naive and irresponsible”. How did you react?

Svensmark: I was just stunned. I remember being shocked by how many thought what I was doing was terrible. I couldn’t understand it because when you are a physicist, you are trained that when you find something that cannot be explained, something that doesn’t fit, that is what you are excited about. If there is a possibility that you might have an explanation, that is something that everybody thinks is what you should pursue. Here was exactly the opposite reaction. It was as though people were saying to me, “This is something that you should not have done.” That was very strange for me, and it has been more or less like that ever since.

To me (Calder) as a reporter of major discoveries that went on to win Nobel prizes in several different fields, the contrast between flimsy conjecture and creative brainpower backed by real evidence is fairly obvious. Being a generalist, rather than a specialist reporter of climate science, also helps to keep me objective, but I’m not inexperienced or ignorant in this field. It can be irritating when “warmist” journalists and campaigners with no relevant training of their own try to question my competence. Hey, I’ve even published a couple of formal scientific papers of my own.

1997 book: The Manic Sun: Weather Theories Confounded about the Sun & climate, including Svensmark’s initial discovery about cosmic rays and clouds

1983 book: Timescale: An Atlas of the Fourth Dimension. Among many other topics it traces climate change from the first ice ages 2300 million years ago to the Little Ice Age ending in 1850.

1974 scientific paper: ‘The Arithmetic of Ice Ages’, Nature, Vol. 252, pp. 216-18, with the first formal confirmation of the Milankovitch Effect. (Done with a pocket calculator, to legitimize what we were saying in The Weather Machine.)

1973 book: Nature in the Round: A Guide to Environmental Science (editor). Includes articles on climate change by L.P. Smith and Grahame Clark.

Calder has often spoken about climate change in lectures and on TV and radio, including an interview (2007) for The Great Global Warming Swindle, WagTV’s production for Channel 4. He has published articles on the subject since 1961.

The Svensmark hypothesis in a nutshell 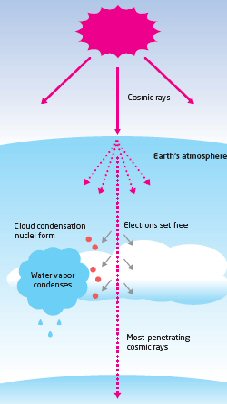 For objections to the Svensmark hypothesis and answers to them, see Falsification tests

Comments Off on Nutshell |