My previous post was too polite about Berkeley Earth. I’d not figured out Richard Muller’s game. The mainstream media have have portrayed him as a repentant climate sceptic who has wonderful new evidence confirming man-made global warming. To see how the story is playing, look for Richard Muller Berkeley on Google News (139 reports and counting).

Normally I try to stick to the science, without being naïve about the politics. Posted earlier on this blog is the text of a talk I gave called “Global Warming is Just Propaganda”, which you’ll find here https://calderup.wordpress.com/2010/06/07/tradecraft-of-propaganda/

It compares the behaviour of the warmists with the tradecraft of propaganda during the Second World War. And the latest bout from Berkeley and the media reminds me, belatedly, of a manipulation of British propaganda in the Balkans in the early 1940s. For global warming read Stalinism and (at the risk of grossly overstating his importance) for Richard Muller read Tito.

Hoodwinking Churchill: Tito’s Great Confidence Trick, by the TV producer and military historian Peter Batty, was published earlier this year. Helped by a Communist mole filtering messages in the British team in Cairo, Tito fooled the West into thinking that he was the hero of the fight against the Italian and German forces in Yugoslavia. In fact he was subverting other guerrilla bands, doing deals with the Germans, and keeping his forces safe for a postwar Communist takeover of Yugoslavia. As Batty relates, Tito secured his 35-year dictatorship by butchering the non-Communist guerrillas who had been the real fighters in the occupied Balkans.

When Richard Muller, leader of the Berkeley Earth Surface Temperatures (BEST) project, gave testimony to the US Congress back in March, he called for the creation of an ARPA-like agency for climate issues. ARPA, more correctly nowadays called DARPA, is the Defense Advanced Research Projects Agency, a mighty organization with a $3 billion budget. Climate ARPA (CARPA?) might offer a promising niche for a 67-year-old astrophysicist.

But if that’s the aim, catastrophic man-made global warming must stay high on the political agenda. How better to go about making sure about that than to call yourself a sceptic, just as Tito pretended to be on Winston Churchill’s side. When the time came to show himself in his true colours Tito was celebrated in the Communist world. Similarly Muller has become an instant hero for the warmists.

Scientifically grotesque was the blurring in the Berkeley press release, as well as in the media, of the meaning of Muller’s main graph, shown in my previous post. Invited to comment by New Scientist, I said:

“What do they mean by ‘global warming is real’? The graph of global land temperature changes associated with BEST’s announcement neatly confirms by their independent method that the warming stopped about 15 years ago. The Sun’s recent laziness has apparently cancelled any effect of ever-increasing man-made greenhouse gases.”

My reply (which wasn’t reported by New Scientist) was:

“Increased activity of the Sun, of course, from 1950 to the early 1990s as signalled most strikingly by the decline in ionizing cosmic rays at the Earth’s surface. See the red curve (ion chamber) in the attached figure.” 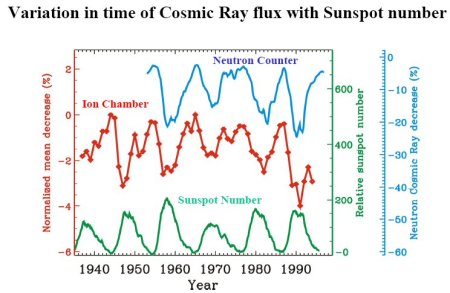 The message about Muller in the media, that “the science is settled (again)”, is completely at odds with the evidence.

This entry was posted on Saturday, October 22nd, 2011 at 20:35 and is filed under 3a) News and Comments. You can follow any responses to this entry through the RSS 2.0 feed. You can leave a response, or trackback from your own site.

13 Responses to Hoodwinked by Berkeley Earth