The long pause in warming confirmed

Just dis-embargoed at noon PST (8 pm BST) on 20 October are a press release and associated papers from the Berkeley Earth Surface Temperatures (BEST) project. A team led by Richard A. Muller has been asking whether the histories of land surface temperatures from the likes of NOAA, NASA and the Hadley Centre are to be trusted. Clever statistics glean and process raw data from 39,000 weather stations world wide – more than five times as many as used by other analysts.

The short answer is that the other histories are broadly validated, as seen in this graph from one of the new papers. 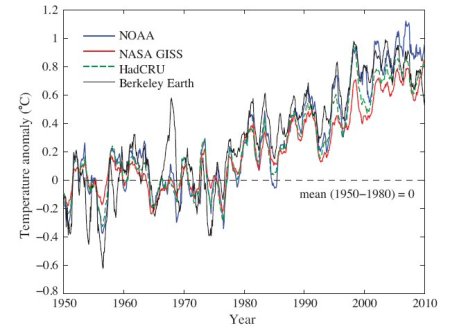 If your eye can trace the black line of the BEST study, based on a random selection of weather stations, you’ll see that the average temperatures of the land correspond quite well with the other series.

What’s very odd is the rhetoric of the press release. It begins:

Global warming is real, according to a major study released today. Despite issues raised by climate change skeptics, the Berkeley Earth Surface Temperature study finds reliable evidence of a rise in the average world land temperature of approximately 1°C since the mid-1950s.

Global warming real? Not recently, folks. The black curve in the graph confirms what experts have known for years, that warming stopped in the mid-1990s, when the Sun was switching from a manic to a depressive phase.

Elsewhere the press release first begs the question by calling the past 50 years “the period during which the human effect on temperatures is discernible” and then contradicts this by saying, “What Berkeley Earth has not done is make an independent assessment of how much of the observed warming is due to human actions, Richard Muller acknowledged.”

Let me say there is interesting stuff in the material released today, particularly in the paper on Decadal Variations, tracing links with El Niño and other regional temperature oscillations” — a subject I may return to when I have more time.

It hasn’t escaped my attention that BEST is today gunning mainly for Anthony Watts and his Surface Stations project in the USA, but he’s well capable of answering for himself. See wattsupwiththat.com/2011/10/20/the-berkeley-earth-surface-temperature-project-puts-pr-before-peer-review/

Added 21 October: See this rather uneasy comment from Judith Curry, a member of the Berkeley teamhttp://judithcurry.com/2011/10/20/berkeley-surface-temperatures-released/

And later: New Scientist quotes me saying something similar to what’s above – followed of course by the usual grossly biased and poorly informed attempt at a put-down http://www.newscientist.com/article/dn21074-sceptical-climate-scientists-concede-earth-has-warmed.html

The BEST home page, with downloadable press release and papers, is here www.BerkeleyEarth.org

The graph shown above is Fig. 1 in “Decadal Variations in the Global Atmospheric Land Temperatures,” Richard A. Muller et al., unpublished

This entry was posted on Thursday, October 20th, 2011 at 19:28 and is filed under 3a) News and Comments. You can follow any responses to this entry through the RSS 2.0 feed. You can leave a response, or trackback from your own site.

19 Responses to The long pause in warming confirmed