Pick of the pics and Updating Einstein’s Universe & Magic Universe

When ultra-cold rubidium atoms club together in the superatoms called Bose-Einstein condensates, they usually make untidy crowds, as on the left. But a team led by Stefan Kuhr and Immanuel Bloch at the Max-Planck-Institut für Quantenoptik in Garching, Germany, brings them to order in a neater pattern, as seen in the middle picture. With more rubidium atoms the superatom grows wider (right). Criss-cross laser beams create a lattice-like pattern of pools of light where the atoms like to congregate. When the laser light’s electric field is relatively weak, the atoms jump (by quantum tunnelling) from one pool to another, creating the usual disorder. A stronger field, as in the central and right-hand images, fixes them in the novel state of matter called a Mott insulator. But atoms can be lost from the condensate, which explains the ring-like appearance on the right. Images from MPQ. 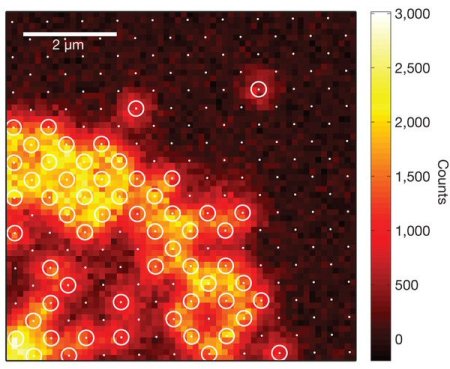 What’s new here, in an advance online publication in Nature,  is not the creation of these kinds of  superatoms but the German team’s success in imaging them, with a specially developed microscope that picks up fluorescence from the atoms caused by the cooling process. In the image on the right individual atoms are pinpointed.

It’s exciting stuff, because we’re probably seeing the dawn of a new technology – after electronics comes “atomics”. If individual atoms in a superatom can be manipulated, they might be used to carry “addressable” information in an atomic computer.

What I’ve written before about it

There’s a concise introduction to superatoms In the latest edition of Einstein’s Universe, in “Afterword 2005: The Melting Pot”:

Remember that Einstein was one of the founders of the quantum theory. He won his Nobel Prize not for relativity but for his I905 paper that established the quantum nature of light and its dismemberment into particles. Later he offered astonishing predictions about the quantum behaviour of light and matter that have been fully borne out. Chapter 5 included his anticipation of the stimulated emission of radiation, now exploited in lasers. A subsequent success has been the creation of superatoms.

In the mid-1920s, taking up ideas from Satyen Bose in Dakha and Louis de Broglie in Paris, Einstein saw that atoms might club together into a single entity. He meant not an ordinary crystal or molecule, but a swarm of similar atoms cohering like a stationary or slow-moving laser beam. Such a ‘Bose-Einstein condensate’ can exist only at extremely low temperatures, within a smidgeon of absolute zero, and seven decades were to pass before suitable technology was available.

Making their debuts in I995 were the first superatoms of rubidium (in Colorado) and of sodium (in Massachusetts). Now scientists and engineers want to use superatoms for making extremely sensitive measurements. For example, cold-atom lasers could act as gyroscopes or accelerometers, in yet another practical payoff from Einstein’s ruminations.

More extensive is the treatment of superatoms in Magic Universe, in the story called “Superatoms, superfluids and superconductors: the march of the boson armies”. The concluding paragraphs include early results from the Garching team foreshadowing today’s report.

The implications of the new ultra-cold states of matter are mind-boggling. As the 20th Century saw the advance of electronics from primitive cathode ray tubes and thermionic valves to microchips and the Internet, the 21st Century will be an era of atomics. Just what that will mean is anyone’s guess, although early expectations include instruments like atomic clocks, gyroscopes, accelerometers, gravity meters and magnetic measuring devices, hundreds or even billions of times more accurate than existing devices.

Escape from the elaborate technology of the pioneering experiments will be a requirement. A preview came in 2001 when two German teams, at Tübingen and the Max-Planck-Institut für Quantenoptik in Garching, produced clouds of condensed rubidium atoms on thumbnail-sized microchips. A team in Garching succeeded in transporting matter waves along the chip surface, using a conveyor belt of undulating micro-wires carrying an alternating current.

Further food for thought came when experiments at the Garching institute created yet another state of matter. They altered a rubidium superatom into a peculiar ultra-cold solid called a Mott insulator, after a British theorist Nevill Mott who explained the unexpected electrical properties of ordinary materials at very low temperatures.

The physicists set up a 3-D framework of bright and dark dots in space, from intersecting interference patterns produced by three laser beams at right angles. To begin with, the superatoms moved freely through this landscape, but as the laser intensities increased the superatom suddenly disappeared. When the light-dark contrast was intense enough, the bright spots became electric traps, like the cavities in an egg carton, in which atoms absconding from the superatom took up residence. They spaced themselves out, as if in a crystal, with two or three atoms in each of more than 150,000 bright spots.

‘We can switch back and forth between the superfluid and solid states just by changing the laser intensities,’ commented Immanuel Bloch of the Garching team. ‘And when we start thinking about applications, one of the first things that springs to mind is a new kind of quantum computer, using atoms instead of electrons.’

A brief update for either book

The possibility of an atomic computer came a step nearer in 2010, when experimenters in Garching succeeded in imaging the individual atoms in a rubidium superatom. If you could see them, maybe you could also manipulate them to handle information.

This entry was posted on Wednesday, August 18th, 2010 at 19:09 and is filed under 1a) Magic Universe, 1b) Einstein's Universe, 5 Pick of the pics. You can follow any responses to this entry through the RSS 2.0 feed. You can leave a response, or trackback from your own site.