Still catching up after Christmas, I’ve been reading an official report from China issued on 29 December, about their plans for space activities in the next five years. In a post in August 2010 called “What language will they speak on Mars?” the answer was “Chinese, on present showing”.

It harked back to a prediction by Wernher von Braun made in 1964.

Man may have landed on the surface of Mars by 1984. If not, he will surely have made a close approach for personal observation of the red planet. Likewise, manned ‘fly-bys’ to Venus will have been made.

Lunar landings will have long since passed from the fantastic achievement to routine occurrence. Astronauts will be shuttling back and forth on regular schedules from the earth to a small permanent base of operations on the moon.

Although unstated, von Braun’s reliance for the Mars flight was on a nuclear rocket called Orion, which was cancelled soon after he wrote his article. Since then the US space programme has faltered or veered about under a succession of Presidents with different priorities. The present lack of American transport to take people to the International Space Station ranks with the British navy’s current construction of aircraft carriers for which there’ll be no suitable aircraft.

By contrast the Chinese space engineers, although starting about half a century behind the USA and Russia and still only moderately funded, are now moving steadily ahead with a programme that has clear and mutually compatible objectives. The new plan includes developing a space laboratory and collecting samples from the Moon by 2016, and building a more powerful manned spaceship. No date is given for a manned landing on the Moon, but that is under study. 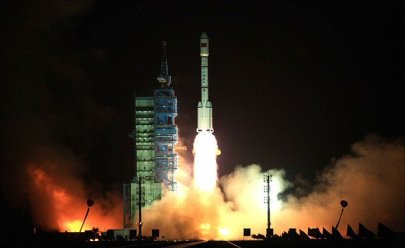 A module for a Chinese space laboratory, the eight-ton Tiangong-1 (“Heavenly Palace-1”), lifted off from the Jiuquan launch site near the Gobi Desert on a Long March 2FT1 rocket on 22 September 2011. Image: Caters News Agency.

The Army coordinates the space programe. Although the report is careful to say, China always adheres to the use of outer space for peaceful purposes, and opposes weaponization or any arms race in outer space, there’s military significance in the BeiDou (“Compass”) navigation satellites. Western and Russian systems are downgraded to stop them guiding hostile missiles too precisely. But with ten BeiDou satellites already launched and focused on East Asia, the Chinese intend to have a 35-satellite global navigation system by 2020.

As for their first shot at Mars, the Chinese have been thwarted by the hoodoo on Russian missions to the Red Planet. Yinghuo-1 (“Shining Planet”) rode piggyback on the Russian Phobos-Grunt spacecraft launched from Baikonur on 8 November last. The pair failed to escape from Earth orbit and disintegrated into the Pacific Ocean on 15 January. There’s been word that the Russians would like to blame a US radar for spoiling their mission, but that’s far-fetched. And the name Yinghuo-1 surely implies that the Chinese will try again.

The Royal Aeronautical Society will have a lecture at its London HQ about “China’s Expanding Space Programme,” next Thursday, 26 January, at 8 pm. Karl Bergquist of the European Space Agency, a Swede fluent in Mandarin. Summary, details and registration here http://aerosociety.com/Events/Event-List/318/Chinas-Expanding-Space-Programme

What Language on Mars?

What Language Will They Speak on Mars?

Chinese, on present showing. Never mind that seven men – Russian (4) European (2) and Chinese (1) – are now two months into a 520-day isolation trial in Moscow, simulating a manned mission to Mars. That’s for show. Political willpower will settle the issue.

In 1964 the rocket engineer Wernher von Braun forecast a human visit to Mars by 1984. That might well have happened had the US not cancelled its proposed Orion rocket in 1965 – the year after von Braun made his prediction. The trouble was that Orion would have had nuclear propulsion, not merely by nuclear motors, but by nuclear bombs. So it had to be abandoned in the aftermath of the nuclear test-ban treaty, much to the annoyance of Freeman J. Dyson and other enthusiasts. 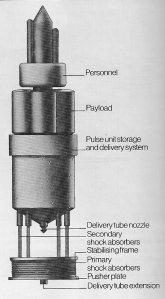 Here’s a diagram from my book Spaceships of the Mind (1978) which accompanied the BBC-OECA series with the same title, produced by Dick Gilling of BBC-TV. Assembled in Earth orbit, Orion would have carried about 2000 10-kiloton nuclear fission bombs, released at a rate of one a second to explode close behind a large spaceship. With a pusher plate absorbing the shocks, the spacecraft would quickly reach a speed that would take about 20 astronauts around Mars and back to Earth in just six months.

It may seem daft now but Orion was a recognition, at the very start of the Space Age, that if human beings are ever to become serious about space travel, they’ll have to think nuclear. That’s still the case, although nuclear fusion will be preferable, of course, with ignition as far from the Earth as possible.

When von Braun contributed to the New Scientist’s 1964 series on “The World in 1984” he remained mute about Orion although he glanced the nuclear option. At the time he was director of NASA’s Marshall Space Flight Center in Huntsville, Alabama, with the Apollo missions to the Moon at the top of his agenda. Here, for a start, are two early extracts from his article entitled “Exploration to the Farthest Planets”: