Did comets spark life on Earth?

An earlier post, Part 1 under this heading, commented enthusiastically but briefly on a French team’s find of extraterrestrial dust grains rich in carbon in the snow of Antarctica. https://calderup.wordpress.com/2010/05/10/comets-and-life/

I promised more to come, and here it begins. Part 2 deals with cosmic carbon compounds. Later, Part 3 will reconsider the initiation of biochemical action, and Part 4 will look at suggestions of natural life footloose in space.

There were far more comets around when the Solar System was young, in the “heavy bombardment” phase of Earth history lasting until 3.8 billion years ago. Water is abundant in interstellar space and available to build the icy nuclei of comets. Comets may have delivered most of the Earth’s surface water, essential for life.

Carbon compounds are the other main ingredient for life. Comets’ tails consist mainly of small dust grains released from the nuclei, including grains laden with carbon compounds that may have contributed to the origin of life on the Earth. Here’s a general impression of important “prebiotic” molecules made in the vicinity of dying stars and newborn stars and available for incorporation into comets. 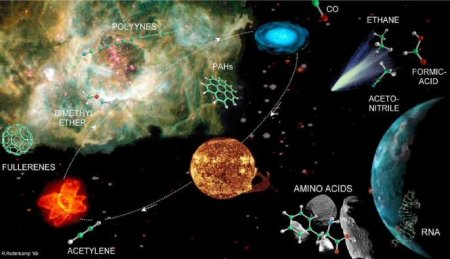 PAHs, polyaromatic hydrocarbons observable in interstellar space, could be ancestral to the aromatic compounds that have the very smell of life. Illustration from Pascale Ehrenfreund & Steven Charnley, 2000 – see reference. Graphic art: ©2000 R. Ruiterkamp