Pick of the Pics and Updating Magic Universe

A predominance of either left-handed or right-handed versions of molecules is likely within huge dust clouds imaged by Japanese astronomers. The electric field of light rays coming from the clouds corkscrews to the left or corkscrews to the right, with “circular polarization”. The different kinds of clouds are clearly distinguishable in a massive star-forming region within the Orion Nebula, called BN/KL. Yellow denotes left-handed light, and red, right-handed. The largest yellow and red features are about 100 times wider than the Solar System, and the astronomers suggest that the polarized light will favour the formation of left-handed or right-handed molecules. The conspicuous dots left of centre near the bottom are bright young stars of the Trapezium group — strong winds  from which have helped the astronomers by blowing away dust that otherwise would obscure the BN/KL region of interest. Credit: Near-infrared (2.14 μm) image with the SIRPOL polarization instrument, NAOJ.

On seeing this report by Tsubasa Fukue and Motohide Tamura of the National Astronomical Observatory of Japan (with colleagues in Japan, UK, Australia and USA) my mind went straight back to Louis Pasteur. 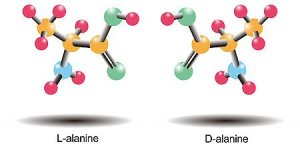 Alanine, an amino acid, has mirror-image forms. L (laevo) rotates the electric field of light to the left and and D (dextro) to the right. Image NAOJ.

Although immortalized for the germ theory of disease, Pasteur’s initial claim to fame came from a discovery he made as a young student – namely that molecules from living sources have effects on the polarization of light, but the same molecules made synthetically do not. This is the phenomenon of chirality, or handedness. Chemists had to learn to think three-dimensionally about versions of molecules that are mirror images of each other. In the example shown here, every amino acid molecule in living things on Earth is of the left-handed (L) kind.

Molecular handedness is a fundamental feature of life and Pasteur suspected that some fundamental feature of the Universe was responsible for it. The phenomenon has been both a puzzle and a spur for investigators of the origin of life. The fact that carbon compounds in meteorites show the same bias in handedness as that seen on Earth suggests that some physical process was at work throughout the Solar System, at least.

The astronomers now offer an answer. Circularly polarized light pervading the dust cloud in which the Sun and its planets were born would have prompted our molecular bias. The scenario is made convincing by the sheer size of the clouds in Orion possessing one polarity or the other. But it ‘s not the Universe-wide mechanism that Pasteur expected. It seems that if the Solar System had originated in a cloud with the opposite kind of circularly polarized light, all our amino acids would be dextro.