The genetic code of wheat

Last night the UK’s Biotechnology and Biological Sciences Research Council made available online a draft of the largest genetic code of an organism ever tackled – the genome of wheat, which is five times larger than the human genome and more than 30 times larger than that of rice, revealed back in 2002. But well worth the effort, for a crop with virtues that have shaped human history since its domestication more than 10,000 years ago. 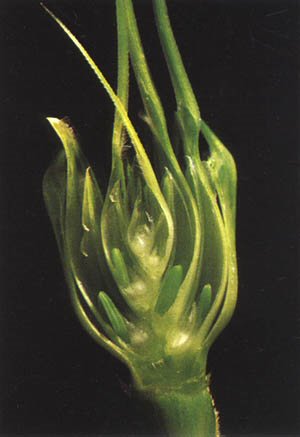 Chinese Spring wheat is the variety now read. Leading the work is the British team of Neil Hall and Anthony Hall at the University of Liverpool, Keith Edwards and Gary Barker at the University of Bristol. and Mike Bevan at the John Innes Centre. Most of the actual gene-reading was done with a “platform” developed in the USA by a subsidiary of Swiss company Roche.

The implications are big. Although the genome isn’t yet organised into its chromosomes, plant breeders now have access to 95 per cent of all wheat genes. That should shorten by some years the time required to develop viable new varieties of wheat that can thrive in marginal conditions – adapted for example to face drought, salty soil, or disease.

Here’s the most relevant extract from the story in Magic Universe called “Cereals: genetic boosts for the most cosseted inhabitants of the planet.”

END_OF_DOCUMENT_TOKEN_TO_BE_REPLACED

The Wisdom of Kilgore Trout

While checking a reference for yesterday’s posting I came across an epigram concerning human behaviour that I declared, back in 1983, should rank with Einstein’s E=mc2 in physics. I quoted it in 1984 and After, but it really ought to be written on every blackboard in the world.

A space traveller called Kago told the Earthlings about the self-reproducing automobiles on a dying planet named Lingo-Three.

“Kago did not know that human beings could be as easily felled by a single idea as by cholera or the bubonic plague. There was no immunity to cuckoo ideas on Earth.” Within a century of Kago’s arrival the Earth was dying too, littered with the shells of automobiles.

Getting an interview with Vonnegut was never easy, but when I managed it my key question was whether Kilgore Trout’s epigram expressed his own opinion. He said, Yes it did.

Before this accidental prompt, I wasn’t going to bother to comment on a paper published this week in the Proceedings of the National Academy of Sciences, no less. Anderegg et al. claim that scientists convinced about man-made global warming are cleverer and better respected, as well as much more numerous, than scientists who are unconvinced.

Now I’ll say that it’s scary but not surprising that the National Academy of Sciences should permit a division of experts into an ingroup and an outgroup, and an evaluation of them by arbitrary tests that have nothing whatever to do with the inherent substance or merit of their research. Unsurprising because it accords with Kilgore Trout’s insight into human behaviour, which has been well verified in psychological experiments.

Alec Nisbett of BBC-TV filmed one experiment called Klee-Kandinsky, executed for real with unsuspecting schoolboys, for our documentary “The Human Conspiracy” (1975).  I also summarize the experiment in Magic Universe, in the story “Altruism and aggression: looking for the origins of those human alternatives”.