Pick of the pics

Planck’s first overview of the cosmos

Microwaves from the entire sky, surveyed by Europe’s Planck spacecraft since August 2009, are here mapped in galactic coordinates. The centre of the Milky Way Galaxy, in Sagittarius, is in the middle. The ribbon of the Milky Way (the flat disc of the Galaxy) extends horizontally across the map, with Cygnus conspicuous towards the left and Orion towards the right. Streamers above and below the disc are regions of star formation. The more subtle mottled regions top and bottom show the cosmic microwave background, from the formation of the first atoms 400,000 years after the Big Bang. The strong microwaves from the Galaxy will have to be gauged and subtracted to reveal hidden parts of that background. Crucial for making the distinction is Planck’s range of nine different microwave frequencies, 30 to 850 Ghz, and its ability to measure the temperature of the sky to one-sixth of a degree.

In Magic Universe I call it “looking for the pattern on the cosmic wallpaper”. Named after the quantum theory pioneer, Planck is the successor to NASA’s WMAP mission. In 2003 WMAP returned wonderful information about the cosmic microwave background but did not quite pin down the theory of the Big Bang that best fits the facts. Maybe Planck will do that, and there seems little point in updating Magic Universe about the cosmic wallpaper until the full Planck results are in, after four surveys of the whole sky, in 2012.

George Efstathiou of Cambridge, the Planck Survey Scientist, says “It has taken sixteen years of hard work by many scientists in Europe, the USA and Canada, to produce this new image of the early Universe. Planck is working brilliantly and we expect to learn a lot about the Big Bang and the creation of our Universe.”

What did Hawking discover?

What did Stephen Hawking discover?

We’re so used to it, we’re not surprised to see an elderly gentleman immobile in a wheelchair, his lips hardly moving, performing for most of this week as the host presenter of Channel 4 TV’s five-part history-of-science series “Genius of Britain”. Like the footballer David Beckham or the actress Joanna Lumley, the theoretical physicist Stephen Hawking is now a national treasure. And with his voice synthesiser he can seem like a visitor from outer space, setting us earthlings right about this and that.

But I’m irritated by the implication in the last programme, which I’ve just watched, that Hawking himself was a primary advocate of the Big Bang, in opposition to the great Fred Hoyle’s Steady State Theory. No mention of the l’atome primitif of the Belgian cosmologist Georges Lemaître in 1927, but he was a Catholic priest and perhaps inadmissible to Hawking’s co-presenter Richard Dawkins. No mention either of Martin Ryle, the Cambridge radio astronomer who first showed observational evidence that confounded Hoyle’s expectations.

Three decades ago, the BBC’s Alec Nisbett and I were the first to put Hawking on international television, in a two-hour blockbuster on particle physics, “The Key to the Universe”. At that time, his dreadful disease of nerve and muscle left his mumbles intelligible only those most familiar with him. We added a voice over, as if he were speaking a foreign language.

For Nisbett and me, Hawking was not only an up-and-coming physicist but an image of the frailty of Homo sapiens confronted by a confusing and often violent cosmos. After describing his then-recent suggestion that small black holes could explode, producing new particles, we incited Hawking to use stirring words to climax our show.

My son Robert is always asking questions. Why this? Why that? Every child does. It is what raises us from being cavemen.

On one view, we are just weak, feeble creatures at the mercy of the forces of Nature. When we discover the laws that govern those forces we rise above them and become masters of the Universe.

Hawking then rose to stardom, taking up Newton’s chair as Lucasian Professor of Mathematics in Cambridge in 1979, and publishing the phenomenal best-seller A Brief History of Time in 1988. He has appeared frequently in “The Simpsons” as well as in scientific documentaries and docu-dramas. He made a sub-orbital spaceflight in 2007 at the age of 65 and during the weightless period he could move freely in his chair for the first time in four decades.

His courage, doggedness and success in the face of a crippling disease has been inspirational to paraplegics the world over. Concern for his predicament has also encouraged many people who might otherwise not have been interested in science to pay some attention to it.

In those respects I’m second to none in my admiration of Hawking. But we’re entitled to ask, as about any other scientist, what his enduring contribution to progress in research has been.

To try to get the tone right, I’ll begin by quoting an eminent but more reclusive theorist, Peter Higgs of Edinburgh, who saw the need for a particle that would give mass to matter, and how it might work. The race to find the Higgs particle, a.k.a the God particle, is now on, using the most powerful accelerators of our time.

But Higgs found himself in hot water during the Edinburgh Festival of 2002. He attended a dinner party celebrating a play based on the work of Paul Dirac, who predicted the existence of antimatter. It was not surprising that the conversation turned to why the public, who knew about Hawking, had never heard of the more important Dirac.

Thinking the dinner was private, Higgs commented about Hawking: “It is very difficult to engage him in discussion, and so he has got away with pronouncements that other people would not. His celebrity status gives him instant credibility that others do not have.”

Next morning Higgs found his remarks quoted in The Scotsman and repeated widely elsewhere. The shocked reaction confirmed Higgs’s point, that someone considered superlatively brilliant as well as handicapped was supposed to be exempt from the normal give and take with his fellow scientists.

END_OF_DOCUMENT_TOKEN_TO_BE_REPLACED

Occasional postings will comment on news of fundamental discoveries. This introduction indicates the breadth of my interest.

Welcome to the spider’s web

Magic Universe: A Grand Tour of Modern Science, is published by the Oxford University Press. The original hardback sub-title was “The Oxford Guide to Modern Science”). It’s made up of 119 short stories about fundamental research and where it seems to be heading, with lots of cross-references between them.

The magic of the Universe reveals itself in those interconnections. As my introduction remarks: “A repertoire of tricks let loose in the Big Bang will make you a planet or a parakeet. … Natural conjuring that links comets with life, genomes with continental drift, iron ore with dementia, and particle physics with cloudiness, mocks the specialists.”

To celebrate a re-union of the many sub-divisions of science that is now in progress, a spider’s web provides the hidden software of the book.

“Everything connects, not by sentimental holism, but in physical and chemical processes that gradually reassemble dem dry bones of Mother Nature. To find out how a swallow knows where to go in the winter, and to solve many other obstinate mysteries, only the cross-disciplinary routes may do.”

In a close-up of the centre of the web, each tag is a story 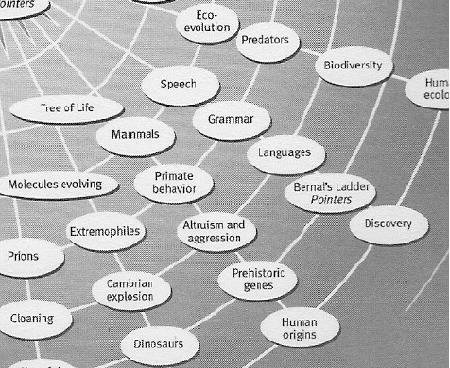 The segment on human evolution

Calder’s own trick is that in a mere instant he can apparently transform the general reader into a superbrain. His dispatches from some of the farthest outreaches of contemporary science are concise and precise, as opposed to simple, but he has a gift for making the conceptually baffling seem approachable. Laurence Phelan, The Independent on Sunday

Nigel Calder remains supreme in his range and depth … he goes to immense trouble to get things right, and also takes pains with the clarity and elegance of his writing. Martin Rees (Lord Rees, Astronomer Royal & President of the Royal Society)

A must for every sixth-form and student of science, it is also the ideal compendium for non-scientists of any age who are trying to keep abreast. John Cornwell, Sunday Times

You can buy Magic Universe: A Grand Tour of Modern Science at:

Or see it on Google Books at: http://books.google.co.uk/books?id=kbPmQX-OoBgC&printsec=frontcover&dq=%22Magic+Universe%22&source=bl&ots=s1BhRIHtGI&sig=FnQQTAQepBlx-2hn5sWoN5zqszA&hl=en&ei=lRzAS7GKHpH20gTx84CeCQ&sa=X&oi=book_result&ct=result&resnum=4&ved=0CBUQ6AEwAw#v=onepage&q&f=false