Pick of the Pics and Updating Magic Universe

A kennelful of Pluto puppies

Three successive images from the Hubble Space Telescope show two remote objects in the Solar System inching across the sky in front of a distant galaxy (bottom left of each image). The near-vertical streaks are due to the objects moving while Hubble was watching. They are small “trans-Neptunian” objects – comets or asteroids – orbiting the Sun at about 43 times farther out than the Earth. They appear to be companions, at about half the separation of the Earth and Moon. Credits: a negative version of part of Fig. 3 in Fuentes et al., Astrophysical Journal (see references); imagery from HST/ACS/WFC

Soon to be published is the discovery of 14 new members of the Solar System in the so-called Kuiper Belt beyond the most distant “real” planet, Neptune. They are 40-100 km leftover scraps from the building of the Sun’s family of planets. To find them, a team from the Harvard-Smithsonian Center for Astrophysics and Northern Arizona University, led by Carlos Fuentes, trawled through existing images from the Hubble Space Telescope.

As Halley’s Comet and 15 other regular visitors came from the trans-Neptunian Kuiper Belt, I suppose I should be updating my Comets book, but although it mentions “Halley-class” comets orbiting not far beyond Neptune, it doesn’t name the Kuiper Belt. That important feature figures in Magic Universe, which was written two decades later and is more receptive to updating on this point. Here’s the most relevant section in the story called “Comets and asteroids: snowy dirtballs and their rocky cousins”.

Kicking over the boxes

To some experts, the idea of a link between comets and asteroids seemed repugnant. Since the first asteroid, Ceres, was discovered by Giuseppe Piazzi of Palermo in 1801, evidence piled up that asteroids were stony objects, sometimes containing metallic iron. They were mostly confined to the Asteroid Belt beyond Mars, where they went in procession around the Sun in well-behaved, nearly circular orbits.

Two centuries after Piazzi’s discovery the count of known objects in the Asteroid Belt had risen past the 40,000 mark. In 1996-97, Europe’s Infrared Space Observatory picked out objects not seen by visible light. As a result, astronomers calculated that more than a million objects of 1 kilometre in diameter or larger populate the Belt. Close-up pictures from other spacecraft showed the asteroids to be rocky objects, probably quite typical of the material that was assembled in the building of the Earth and Mars.

What could be more different from the icy comets? When they are not confined to distant swarms, comets dash through the inner Solar System in all directions and sometimes, like Halley’s Comet, go the wrong way around the Sun — in the opposite sense to which the planets revolve.

‘Scientists have a strong urge to place Mother Nature’s objects into neat boxes,’ Donald Yeomans of NASA’s Jet Propulsion Laboratory commented in 2000. ‘Within the past few years, however, Mother Nature has kicked over the boxes entirely, spilling the contents and demanding that scientists recognize crossover objects — asteroids that behave like comets, and comets that behave like asteroids.’

Besides Phaeton, and other asteroidal candidates to be dead comets, Yeomans’ crossover objects included three objects that astronomers had classified both as asteroids and comets. These were Chiron orbiting between Saturn and Uranus, Comet Wilson-Harrington on an eccentric orbit, and Comet Elst-Pizarro within the Asteroid Belt. In 1998 a stony meteorite — supposedly a piece of an asteroid — fell in Monahans, Texas, and was found to contain salt water. Confusion grew with the discovery in 1999 of two asteroids going the wrong way around the Sun, supposedly a prerogative of comets.

Meanwhile the remote planet Pluto turned out to be comet-like. Pluto is smaller than the Earth’s Moon, and has a moon of its own, Charon. When its eccentric orbit brings it a little nearer to the Sun than Neptune, as it did between 1979 and 1999, frozen gases on its surface vaporize in the manner of a comet — albeit with unusual ingredients, mainly nitrogen. For reasons of scientific history, the International Astronomical Union nevertheless decided to go on calling Pluto a major planet.

In 1992, from Mauna Kea, David Jewitt of Hawaii and Jane Luu of UC Berkeley spotted the first of many other bodies in Pluto’s realm. Orbiting farther from the Sun than the most distant large planet, Neptune, these transneptunian objects are members of the Edgeworth-Kuiper Belt, named after astronomers who speculated about their existence around 1950. 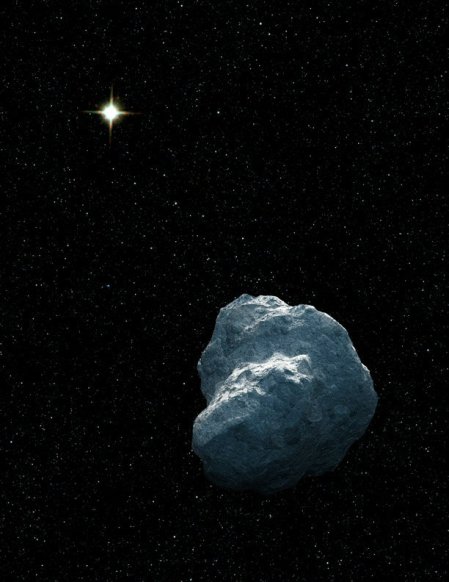 An artist's concept of a trans-Neptunian object, far from the Sun. Credit: NASA, ESA, and G. Bacon (STScI)

Some 300 transneptunians were known by the end of the century. There were estimated to be perhaps 100,000 small Pluto-like objects in the belt, and a billion ordinary comets. If so, both in numbers and total mass, the new belt far surpasses what has hitherto been called the main Asteroid Belt between Mars and Jupiter.

‘These discoveries are something we could barely have guessed at just a decade ago,’ said Alan Stern of the Southwest Research Institute, Colorado. ‘They are so fundamental that basic texts in astronomy will require revision.’ One early inference was that comets now on fairly small orbits around the Sun did not originate from the Oort Cloud, as previously supposed, but from the much closer Edgeworth-Kuiper Belt. These comets may be the products of collisions in the belt, as may Pluto and Charon. A large moon of Neptune, called Triton, could have originated there too. .

In 2003 Eris, 2400 kilometres in diameter, turned up as the first trans-Neptunian object larger than Pluto, which at last became demoted to a “dwarf planet”. The count of known trans-Neptunian grew in 2010, with more than a dozen additions coming from searches of existing images of the Hubble Space Telescope. A kennelful of Pluto puppies, if you will. And that initial study examined only one-third of a square degree of the sky, in a narrow band around the ecliptic – the plane in which major planets orbit.

“We have proven our ability to detect and characterize trans-Neptunian objects even with data intended for completely different purposes,” said Carlos Fuentes of Northern Arizona University, who led the research. He and his team regarded their trawl as only just beginning, with perhaps hundreds more objects waiting to be discovered in the Hubble archive.

This entry was posted on Monday, September 13th, 2010 at 21:29 and is filed under 1a) Magic Universe, 5 Pick of the pics. You can follow any responses to this entry through the RSS 2.0 feed. You can leave a response, or trackback from your own site.

5 Responses to Kennelful of Pluto puppies