Did comets spark life on Earth?

An earlier post, Part 1 under this heading, commented enthusiastically but briefly on a French team’s find of extraterrestrial dust grains rich in carbon in the snow of Antarctica. https://calderup.wordpress.com/2010/05/10/comets-and-life/

I promised more to come, and here it begins. Part 2 deals with cosmic carbon compounds. Later, Part 3 will reconsider the initiation of biochemical action, and Part 4 will look at suggestions of natural life footloose in space.

There were far more comets around when the Solar System was young, in the “heavy bombardment” phase of Earth history lasting until 3.8 billion years ago. Water is abundant in interstellar space and available to build the icy nuclei of comets. Comets may have delivered most of the Earth’s surface water, essential for life.

Carbon compounds are the other main ingredient for life. Comets’ tails consist mainly of small dust grains released from the nuclei, including grains laden with carbon compounds that may have contributed to the origin of life on the Earth. Here’s a general impression of important “prebiotic” molecules made in the vicinity of dying stars and newborn stars and available for incorporation into comets.

PAHs, polyaromatic hydrocarbons observable in interstellar space, could be ancestral to the aromatic compounds that have the very smell of life. Illustration from Pascale Ehrenfreund & Steven Charnley, 2000 – see reference. Graphic art: ©2000 R. Ruiterkamp

In Magic Universe, my story about “Molecules in space: exotic chemistry among the stars” has this sub-section:

Carbon lords of the jungle

The hunters extended their quest for molecules in cosmic space by using forms of invisible light coming from the Galaxy, that are mainly detectable only with aircraft, balloons, rockets or satellites. Interstellar hydrogen molecules, as opposed to solo atoms, first showed up in 1970 in an ultraviolet rocket-borne telescope. And in 1984, after using ground-based and airborne infrared telescopes to inspect some brightly lit dust clouds near stars, Alain Léger and Jean-Loup Puget at the Institut d’Astrophysique Spatiale in France reported possible signatures of very large exotic molecules, called polycyclic aromatic hydrocarbons, or PAHs for short.

These are molecules with perhaps 20 to 90 atoms of hydrogen and carbon, in which the carbon atoms are arranged in interlocking, polycyclic rings. Aromatic is a chemist’s term for molecules containing carbon rings in which the atoms pass electrons around like a loving cup. On the Earth, aromatic compounds smell of life, being ubiquitous among the key ingredients of living organisms, from the genes to the light-absorbing pigments of plants and eyes. In interstellar space, PAHs are chemically robust, and survive well.

‘For more than ten years after we predicted that PAHs should be ubiquitous, they seemed to be nothing more than a curious idea, inferred from the spectra of very few objects,’ Léger said. ‘But when the Infrared Space Observatory began operations in 1996 it immediately saw strong emissions in many different places in the sky, at exactly the wavelengths to be expected from PAHs. That was a happy confirmation of our prediction.’

In clouds around dying stars and newborn stars, or scattered far and wide in interstellar space, the Infrared Space Observatory, a European satellite (1995-98), discovered huge quantities of PAHs, signalled by intense emissions at a series of infrared wavelengths from 3 to 15 microns. The PAHs were detectable in other galaxies too. These lords of the cosmic molecular jungle may account for several per cent of all the free-range carbon in the Universe.

Doubters would at first speak only of ‘unidentified bands’ in the infrared spectrum. They complained that no one had detected benzene in interstellar space. Benzene is the basic aromatic ring, with just six carbon atoms. Without any sign of that, why believe in the PAHs? The objection disappeared when Spanish and Dutch astronomers re-examined observations of a dying star, and found the benzene signature. Chemists looked again at the carbon-rich material found in some in meteorites, and they discovered tangible PAHs delivered to the Earth from space.

Experimental chemists were inspired by astronomy to make novel materials. Most famous are the buckyballs, where 60 or 70 carbon atoms make football-like molecules from interlocking rings. Ironically, these had a huge impact on terrestrial chemistry and engineering research, before their identification in interstellar space — which early in the 21st Century remained at best ambiguous. But buckyballs were found in meteorites, so their extraterrestrial existence was not in doubt. 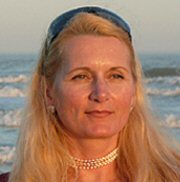 For updating Magic Universe, I find I did not err in betting heavily on the magic of PAHs. They have certainly thrived as a subject for investigation and now more details can be added. For a witness, here’s Pascale Ehrenfreund, whose diagram I use at the start of this post, in an interview about PAHs with Astrobiology Magazine:

We suggest the aromatic material can be used as a container, as a metabolic unit, and as a genetic information carrier. We think that aromatic material can be used for all three requirements for life. … You can’t have one compound to assemble material, and then add something else later on to do another function. They have to be combined from the beginning — life needs to have an identity, it needs energy, and it needs to be able to reproduce and evolve. That’s why PAHs are potentially so powerful, because with these aromatic compounds you can fulfil all three functions at the same time.

That triple function of the PAHs is well worth noting as an update.

This entry was posted on Tuesday, June 1st, 2010 at 18:47 and is filed under 1a) Magic Universe, 1c) Comets. You can follow any responses to this entry through the RSS 2.0 feed. You can leave a response, or trackback from your own site.

5 Responses to Comets and life 2