It’s a tragedy of religion, politics and war. Friday’s Taliban attacks on two Ahmadi mosques near Lahore in Pakistan left more than 90 Friday worshippers, policemen and suicide bombers dead, in Model Town and Garhi Shahu. My sympathies go to the Ahmadis I know, who belong to the relatively young and controversial Ahmadiyya Muslim sect. I’ve heard today that relatives of Ahmadis in my own town in Sussex are among the casualties. 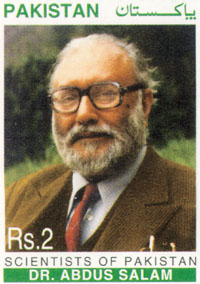 My thoughts also turn to Abdus Salam, the Nobel prizewinner from Pakistan who died in 1996. He was one of my most valued mentors during my career as a science reporter – about tackling Third World poverty, about science and religion, and about fundamental physics. But he happened also to be an Ahmadi.

I’ve written the shooting script for a 90-minute documentary film about Abdus Salam for Kailoola Productions, New York. It covers all those concerns of his that I’ve mentioned, and more. It awaits funding. But when it gets going — as I’m sure it will, because it is a necessary film for all sorts of scientific, educational and ethnic reasons — I may have to fret about the safety of the film crew and the Pakistani scientists and scholars who will contribute to it.

Salam himself took part in a TV production that I scripted — “The Key to the Universe”, 1977, produced and directed by Alec Nisbett – and he was earlier a key contributor to the series in New Scientist on “The World in 1984” that I edited in 1964. Here I want simply to recall how Salam’s joy in his physics contrasted with his grief about his treatment in the country of his birth.

For Magic Universe, in the story called “Electroweak force: how Europe recovered its fading glory in particle physics”, I remembered an important encounter with Salam, when I traded shamelessly on our years of friendship.

A privilege of being a science reporter is the chance to learn the latest ideas directly from people engaged in making discoveries. In 1976, after visiting a hundred experts across Europe and the USA, a reporter scripting a television documentary on particle physics [The Key to the Universe] knew in detail what the crucial experiments were, and what the theorists were predicting. But he still didn’t understand the ideas deeply enough to explain them in simple terms to a TV audience. The reporter therefore begged an urgent tutorial from Abdus Salam, a Pakistani theorist then in London.

In the senior common room at Imperial College, a promised hour became three hours as the conversation went around the subject again and again. It kept coming back to photons, which are particles of light, to electrons, which are dinky, negatively charged particles, and to positrons, which are anti-electrons with positive charge. The relationship between those particles was central to Salam’s own idea about how the electric force might be united to another force in the cosmos, the weak force that changes one form of matter into another.

The turning point came when the reporter started to comment, ‘Yes, you say that a photon can turn into an electron and a positron … ,’ and Salam interrupted him. ‘No! I say a photon is an electron and a positron.’ The scales dropped from the reporter’s eyes and he saw the splendour of the new physics, which was soon to evolve into what came to be called the Standard Model.

Later in the story I recalled the moment when Salam knew his ideas were confirmed by Mother Nature:

The CERN experimenters shot pulses of neutrinos into Gargamelle. When one of the neutrinos condescended to interact with other matter, by means of the weak force, trails of bubbles in the freon revealed charged products of the interactions. Analysts in Aachen, Brussels, Paris, Milan, London, Orsay, Oxford and at CERN itself patiently analysed Gargamelle photos of hundreds of thousands of neutrino pulses, and measured the bubble-tracks.

About one picture in a thousand showed particles set in motion by an impacting neutrino that did not change its own identity in the interaction. It behaved in the predicted cannon-ball fashion. The first example turned up in Helmut Faissner’s laboratory in Aachen in 1972. An electron had suddenly started moving as if driven by an invisible agency — by a neutrino that, being neutral, left no track in the bubble chamber.

In other cases, a spray of particles showed the debris from an atomic nucleus in the freon of the bubble chamber, hit by a neutrino. In normal weak interactions, the track of a heavy electron (muon) also appeared, made by the transformation of the neutrino. But in a few cases an unmodified neutrino went on its way unseen. This was precisely the behaviour expected of the uncharged Z carrier of the weak force, expected in the electroweak theory.

The first that Salam heard about it was when he was carrying his luggage through Aix-en-Provence on his way to a scientific meeting, and a car pulled up beside him. ‘Get in,’ said Paul Musset of the Gargamelle Collaboration. ‘We have found neutral currents.’

Oh dear, the jargon! When announced in 1973, the discovery by the European team might have caused more of a stir if the physicists had not kept calling it the weak interaction via the neutral current. It sounded not just vague and complicated, but insipid. In reality the bubble chamber had revealed a new kind of force in the Universe, Weak Force Mark II. 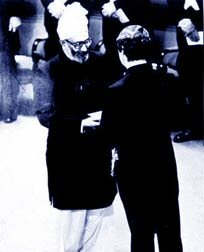 With hindsight, that was the birth of what is now called the Standard Model of particle physics, and the 1979 Nobel Prize for Physics was awarded for the prediction of the new force. Abdus Salam shared it with Sheldon Glashow and Steven Weinberg, who had worked on the theory independently. Salam collected his prize from the King of Sweden wearing a traditional turban. Yet by then his relationship with his homeland had passed the breaking point.

During the 1960s, when Salam was the Pakistani President’s science adviser, he had helped to launch major programmes in nuclear and space science and technology, in soil desalination and plant breeding, and in science education. But in 1974, amid all the excitement about the results from CERN’s Gargamelle, the Pakistani Parliament declared Ahmadis to be non-Muslims. That left them as alleged apostates, in a worse state than the Hindus and Christians of Pakistan.

Salam grew a beard, “to prove himself a Muslim”. Devout he certainly was, because when he worked at his physics early each morning, recorded readings from the Koran played quietly in the background. But considering himself an exile, he thereafter divided his time between Imperial College London and the International Centre for Theoretical Physics in Trieste, of which he was the founding director.

In 1979, when Salam’s Nobel Prize was announced, the ambiguities began. The President of Pakistan invited him to Islamabad to receive the country’s highest civilian honour, Nishan-e-Imtiaz, but he was not invited to speak to students, because the university was afraid of anti-Ahmadi violence. 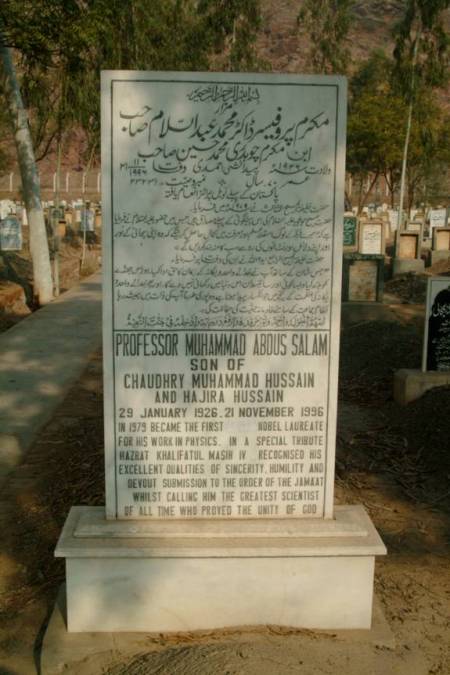 Salam's headstone in Pakistan, with the word "Muslim" erased.

When Salam died in 1996, he was buried in Pakistan in the Ahmadi cemetery in Rabwah (where this weekend’s victims have also gone). As his son Umar Salam has described it, the authorities and the media were confused about how to react to the death of their most famous scientist. No one came from the government of Pakistan, but officials from the government of Punjab Province met the coffin at the airport and allowed it to drive out through a special gate intended for presidents and kings. Some 13,000 people filed past Salam’s coffin that night, and thousands coming from all over Pakistan risked disapproval to join the huge crowd attending the funeral next day.

The ambiguities continued when, in 1998, the Pakistani Post Office issued a commemorative stamp (shown at the outset), and, in an accompanying statement, declared Salam to be “one of the most outstanding scientists of Pakistan”. Having it both ways, you could say.

For information on the proposed Salam film see http://www.kailoola.com/abdussalamdocufilm/home.php

This entry was posted on Sunday, May 30th, 2010 at 23:21 and is filed under 1a) Magic Universe. You can follow any responses to this entry through the RSS 2.0 feed. You can leave a response, or trackback from your own site.